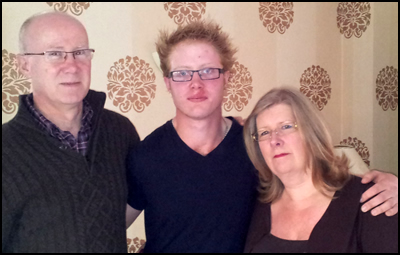 “It is every parent’s worst nightmare. I was at work when my wife, Kim, called to tell me our son Rob was being airlifted to hospital by Surrey Air Ambulance after a terrible crash. I met the police at the Royal London Hospital and Kim was driven up by traffic police. We were taken into intensive care where Rob was lying in a coma, with a bolt in his skull and on a ventilator. We were told we were very likely to lose him but, if he did survive, he was likely to be severely brain damaged’’

“We found out later that he had been pronounced dead at the scene before the air ambulance arrived. It was only the work of the doctor on board that saved his life, actually performing open chest surgery at the roadside. Rob had only been driving for six weeks when he lost control on a bend, flipped over and crashed into a tree. He admits that it was likely to be down to his inexperience even though he was under the posted speed limit at the time. That doesn’t matter now. All that counts is that Rob’s out of hospital and is getting back to the way he was before the crash. We are all just so thankful that he’s alive.”