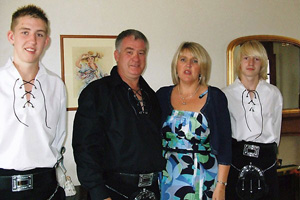 Diane Matheson, of Inverness, believes parents should take more responsibility for their children being able to drive.

She said: “Parents will pay others to teach their children how to drive without accepting that it is up to them to teach them as well.”

Diane’s son Callum, 17, was killed on Island Bank Road in the town two years ago after the car he was a passenger in, came off the road and hit a wall. The driver, also 17 and his childhood friend, was under the influence of drink at the time.

The pair had only been in the car for 40 seconds when the collision occurred.

Diane said: "We all remember being told about stranger danger in school but we would like to highlight 'mate danger,' because they are no mate if they have a drink or take drugs and get behind the wheel with your son or daughter in the vehicle.

“Anybody who drives, and takes passengers, is responsible for those passengers”

Diane’s second son is nearly 17 but she said she won’t encourage him to drive. Instead, he will have to work and pay for lessons himself.

She added: “By the time he’s able to afford lessons he will be around 21 which is a far more mature age to start driving than 17.”